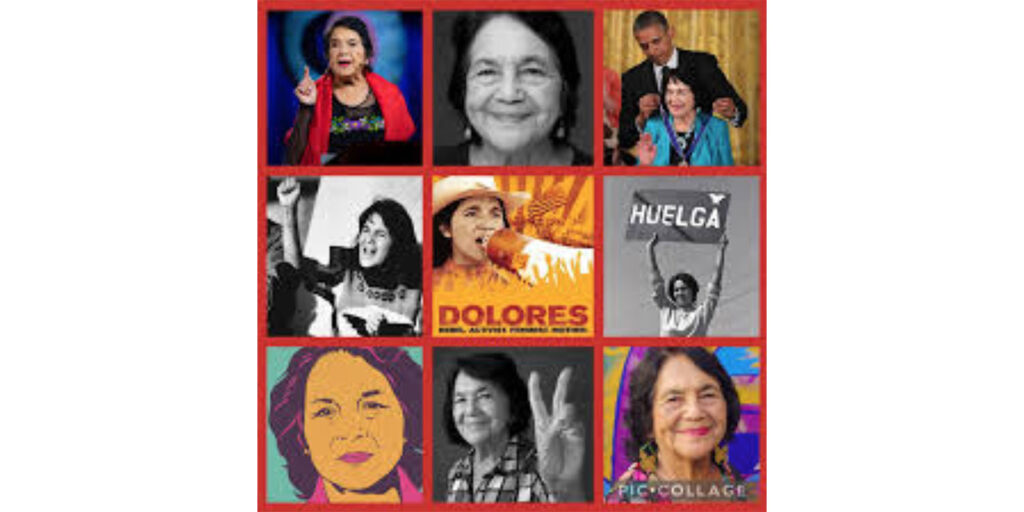 Dolores Huerta is an iconic civil rights leader and advocate for farm labor, women, immigrants, and people living in poverty. She is known for her leadership of the National Farmworkers Union with César Chávez and their successful table grape and lettuce boycotts. At 92, she is a living feminist and still influential labor activist. In 2012 President Obama bestowed Dolores with her most prestigious award, the Presidential Medal of Freedom, the highest US civilian award. Receiving this award Dolores said:

“The freedom of association means that people can come together in organization to fight for solutions to the problems they confront in their communities. The great social justice changes in our country have happened when people came together, organized, and took direct action. It is this right that sustains and nurtures our democracy today. The civil rights movement, the labor movement, the women’s movement, and the equality movement for our LGBT brothers and sisters are all manifestations of these rights. I thank President Obama for raising the importance of organizing to the highest level of merit and honor.”

Her deceptively simple exhortation — “¡SÍ se puede!” — (“Yes we can!”) — contains the yearning for change and has become the mantra for generations of activists. She calls us to action and to be engaged citizens who make a difference.

A primary reason that she became a feminist is because of her mother’s independence and entrepreneurial spirit. Her mother encouraged cultural diversity in Dolores’ life and community activism. This then influenced Dolores to become an organizer.

During Dolores’ time serving in the leadership of the Stockton Community Service Organization (CSO) she founded the Agricultural Workers Association. She resigned from CSO with her colleague César Chávez because they shared a common vision of organizing farm workers. In 1962, the pair launched the National Farm Workers Association, which then became the United Farm Workers Union. She would then become instrumental in the enactment of the California Agricultural Labor Relations Act of 1975.

While directing the first National Boycott of California Table Grapes out of New York she came into contact with Gloria Steinem and the burgeoning feminist movement who rallied behind the cause. Quickly she realized they shared much in common. Having found a supportive voice with other feminists, Dolores consciously began to challenge gender discrimination within the farm workers’ movement.

She continues to play a critical role in advocating for women farm workers and young women everywhere while being an advocate for the working poor and children. She is an admirable role model and inspirational warrior for justice.