In the early 1980s, the Alliance for Sustainability (originally the International Alliance for Sustainable Agriculture) germinated from seeds sown around the world by a diverse group of farmers, consumers, business and government leaders, environmentalists, educators and scientists, many of whom were members of the International Federation of Organic Agriculture Movements (IFOAM).

Never doubt that a small group of thoughtful, committed citizens can change the world; indeed, it’s the only thing that ever has.

This group shared a common vision: the worldwide realization of sustainability with a focus on sustainable agriculture – food systems that they defined as ecologically sound, economically viable, socially just and humane.

They developed relationships with many groups, including the Pesticide Action Network, Minnesota Public Interest Research Group, the Organic Growers and Buyers Association, Friends of the Earth, and most importantly, the Third World Institute (TWI) in the Newman Center at the University of Minnesota. This democratic citizens’ group met weekly to study issues and take action, such as the Infant Formula Action Coalition and the Nestlé boycott, whose seven-year effort led to the greatest consumer victory in the history of the world.

Members of TWI read David Weir and Mark Schapiro’s The Circle of Poison, about how pesticides banned in the U.S. and other industrialized countries are exported to the South where they poison people and destroy the environment before returning to North as toxic residues in food. They felt action had to be taken and worked with the leaders of the ISAP to address these issues. Thus, the International Alliance for Sustainable Agriculture was founded, also in the Newman Center, to launch a series of efforts to address the challenges. On May 18, 1983, hunger expert and Diet for a Small Planet author, Francis Moore Lappé, officially launched the Alliance with a news conference followed by a Green Ribbon Untying Ceremony, native seed planting ceremony, organic, vegetarian Mexican dinner and a talk to 450 people at the historic Newman Center.

This kicked off a week-long series of education and action events entitled, “Creating a World Without Hunger or Pesticide Abuse” that featured an all-day workshop on “Advanced, Ecologically Sound Food Growing”, World Food Day and the Upper Midwest Pesticide Action Network Conference.

The Alliance has never lost its  ability to accomplish a great deal with its financial resources thanks to its outstanding volunteers, interns and Board members. Two of its most significant contributions were its development of a holistic definition of sustainability and empowerment of members and the public to change their lifestyles and influence fundamental changes in business and government throughout the world. It had many others successes, including:

Working with environmental groups, socially responsible investors, labor unions, religious organizations and the pension funds for the State of California and City of New York to develop the CERES Principles for corporate environmental responsibility and getting more than 80 corporations to sign them, including Aveda, GM, Polaroid and Sunocco.

Helping to pass the nation’s most rigorous organic standards, Minnesota’s landmark Ground Water Protection Act, a ban on the hazardous pesticides chlordane and heptachlor and a million dollar, low-interest revolving loan program for farmers to change over to sustainable practices (the nation’s first).

The Humane Sustainable Agriculture Project’s (HSAP) successful dialogue between polarized farmers and animal protection groups, development of a definition and set of HSAP principles and inclusion of HSAP principles in National Organic Standards.

Overseeing Skiers Ending Hunger, an educational and fundraising organization that has raised more than half a million dollars for local food shelves and Sustainable Development partnerships with groups in Africa, Asia and Latin America, as well as Hopi Indians in Arizona.

A major public education campaign with numerous presentations, slide shows such as “A Grain of Hope,” articles and radio/TV interviews. In addition, the Alliance’s Resource Center handles hundreds of information requests each year.
Publishing its newsletter “Manna” and numerous books: Breaking the Pesticide Habit; Planting the Future; Healthy Harvest III; New Directions in Agriculture; The Humane Consumer and Producer Guide (with the Humane Society of the U.S.) and Minnesota Green Pages. 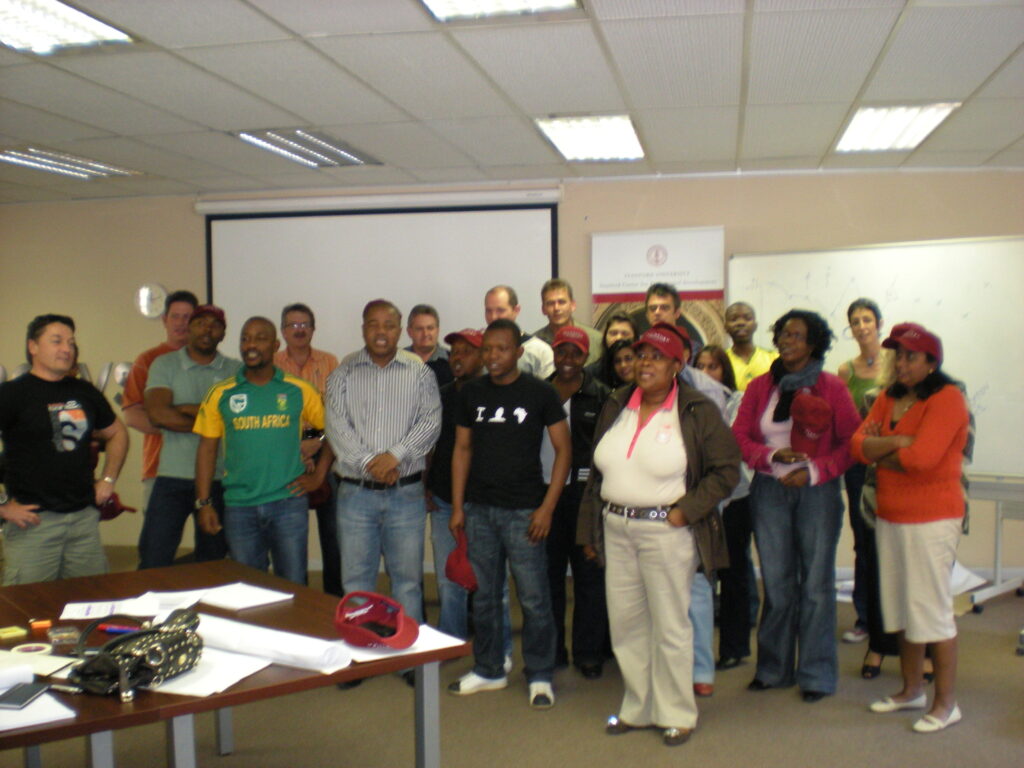 Perhaps the most significant highlight of its first ten years was at the UN Earth Summit in 1992. In 1991 the Alliance was invited to a consultation in the Netherlands with the United Nation’s Food and Agriculture Organization (FAO). The Alliance, a number of NGOs (Non-Government Organizations) and supportive countries succeeded in persuading the FAO to support sustainable agriculture for the first time. Consequently, this commitment to sustainability was included as Chapter 14 of the UN Earth Summit’s Agenda 21 action plan for the 21st Century.

Building on this success, Alliance Executive Director Terry Gips was selected as an NGO delegate to the 1992 UN Earth Summit in Rio. He worked with hundreds of NGOs and other allies to get all 179 countries attending to sign Agenda 21 and thereby adopt sustainable agriculture as a goal, truly an historic step.

Participation in the Earth Summit began a fundamental shift in the Alliance’s global sustainable agriculture mission for two reasons. First, it became clear that the most challenging work actually needed to take place back in the U.S., where so many of the global challenges began, whether from the impact of consumption, agribusiness, development programs, education or Hollywood images. Second, the increasing adoption of sustainable agriculture by government meant that the Alliance could turn over its efforts to more mainstream institutions.

The Alliance decided to expand the mission from sustainable agriculture to overall sustainability: “Supporting ecologically sound, economically viable, socially just and humane projects on a personal, organizational and planetary level.” The Board also created a new umbrella name for the organization: The Alliance for Sustainability.

In many ways this was a natural evolution because the founders of the Alliance always envisioned its work on sustainable agriculture as a subset of the larger goal of sustainability. The Alliance committed itself to supporting multi-faceted, creative, engaging and impactful projects that could demonstrate the various aspects of sustainability in a positive way and lead to systemic change. 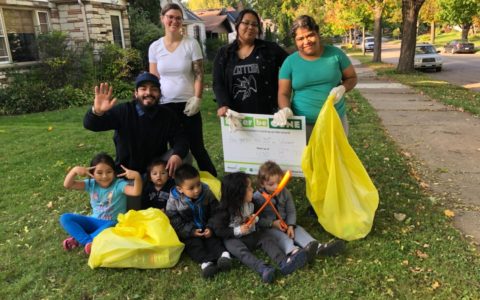 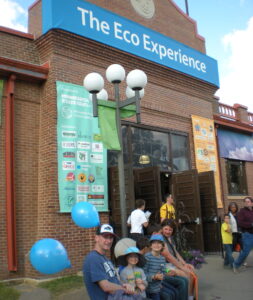 It offered seminars and established a partnership with Swedish leaders resulting in organized tours across the US and Sweden beginning in 1997.

This led to an array of other sustainability initiatives, including the Junk Mail Tree Project, Sustainable City Initiative and the co-founding of the annual Living Green Expo (now the Eco Experience) with other non-profits, state agencies and businesses. The Alliance also changed to increasingly electronic communications, creating its first website and shifting its newsletter “Manna” into one of the first tree-free monthly e-newsletters. In April 2002, Sean Gosiewski became the Alliance’s Executive Director.

Over the years the Alliance developed a range of partnerships, including:

The Alliance has sustained itself through the the tireless work of volunteers and interns, in-kind and financial support from its membership, foundations, donors, corporation and religious groups.

In 2019 the Alliance for Sustainability developed the Resilient Cities Coalition (RCC) to support cities, their citizens and institutions to become fully resilient through impactful collaboration, innovative programs, community engagement, and policy advocacy.  We launched the RCC with leaders from 50 metro cities, building upon our past ten years of successful work with the cities. We developed the RCC with on these principles:

Values – the RCC is a non-partisan group that focuses on collaborative, win-win-win solutions to community issues of health, equity, sustainability, and resiliency.

Strategy – We seek to accelerate the shift to resiliency by building upon our collaborative work with 40 metro area cities and aligning local and statewide goals and policies for greater impact. We will support and strengthen these cities to become successful, inspiring models for other cities throughout Minnesota and the United States.

Need – The 2018 UN Climate Report warns that all nations must work more rapidly to cut greenhouse gas emissions to avoid catastrophic environmental and humanitarian results. Cities are taking the lead across the world, U.S. and in Minnesota in achieving our state and U.N. climate goals on time.

In 2020 the Alliance spun off the Resilient Cities Coalition as its own non-profit.