Or if you can’t join us today you can take action on line at http://www.tlcminnesota.org/take-action/#/

In the coming months, TLC will keep fighting for new, long-term investments in bus, rail, bicycling, and walking. But, right now, one critical project needs your voice. Speak up today to save Southwest light rail.

A federal deadline is looming on September 2. Without a local match of $135 million, Southwest is likely to miss out on more than $900 million in federal funds. Urge Governor Dayton to pursue local funding to keep this project alive and on track.

Funding for Southwest light rail ideally would have come from the legislature in the form of a metro sales tax and as part of a bill that funded all modes of transportation. Unfortunately, the House Majority leadership’s anti-transit agenda got in the way.

We can still secure the 900 million federal transit funding for this vital line  if the 100 million in the local match is secured by Sept 2.

Dayton seeks a plan B to pay for Southwest light rail
http://www.mprnews.org/story/2016/08/25/dayton-seeks-pay-plan-southwest-light-rail 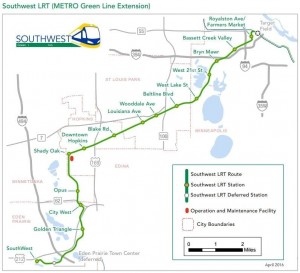